June 2007 Ralf Schneider and Dieter Dicke ask their birthday guests to give money to our benevolent support system for New Orleans instead of buying presents.  MANY THANKS  to these wonderful people.

11 till 23 April 07 Dr. Lumma visits New Orleans in order to get an idea of how things are going on. He hands out some of the fund-raised money personally. Most of it had been sent beforehand via safe internet-banking, especially the money that Doggy Hund (Maryland Jazzband of Cologne), Lillian Boutté and Christoph Wackerbarth (New Orleans Hilfe e.V.) had collected lately. Strategy Meetings with Sandra Gordon (President St. Augustine Church in the Tremé), Bethany Bultman (New Orleans Musicians Clinic), Dr. Nancy Mock (Professor at the Tulane University), Ralf Black (Co-Organizer of the French Quarter Festival) and some members of the local Renew New Orleans Movement (the bracelet people around Mike Latino from Baton Rouge)

Our member HP Schüller (pianist of Fats Jazz Cats) and Dr. Lumma are invited by Sandra Gordon to visit the newly built Musicians Village and to have a close look at the actual development of the St. Augustine Fellowship Hall in the Tremé.

Sandra, HP & Klaus meet Chuck at his new home in the musicians village

They are both also invited to join Carol LeBlanc with playing hymns during sunday service at the church. Plans are made for 2008 to invite Sandra and Carol to Germany to guide a Gospel workshop in the Euregio area of Aachen - Maastricht together with Fats Jazz Cats.

Dr. Lumma (alias Fats) and HP also play the French Quarter Festival 2007, Fats joins the Tremé Brassband of Benny Jones for Kermit Ruffins marriage and they both have a wonderful reunion with some of the musicians who will join them with the Dutch Hurricane Brassband at JazzAscona 2007 for two weeks in Juni. See: http://www.jazzascona.com/

29. March 2007 in Germany: Start of the series SPIRIT OF NEW ORLEANS at Talbhahnhof Eschweiler/Aachen - 8 pm to 10.30 pm  - monthly every fourth or last thursday with Fats Jazz Cats, HP Schüller & Co. Photographer & trumpeter Sheik Richardson, AWK, -Lady-singer Lillian Boutté and Reverend Father Jerome LeDoux, they are our personal patrons of this Jazz project  for the support of the Afro-American Culture.  "We now need a European Marshall-Plan for Lousiana", this is what Sheik said to the Germans when he visited Eschweiler and Maastricht/ (Holland) in 2006. The series SPIRIT OF NEW  ORLEANS deals with this issue and regularly informs about the local development of the Crescent City of Jazz . Dates: 29. March 07 * 26. April 07 * 30. May 07 * 4. July 07 together with Sheik Richardson from New Orleans * 22. July = sunday matiné 11h ***** 23. August 07 * 20. September 07 * 25. Oktober 07 * 29. November 07 * 20. Dezember 07 * No entrance fee * Donations welcome. (please look at: www.talbahnhof-eschweiler.de

2007 January 2 We bury Betty Assunto, Dutchess of the Original Dukes of Dixieland in the late 1940's. She who died a natural death in her 80's. The band that plays there is perfectly traditional: shoes shined, black suits, hats, and ties. The traditional slow drags to the cemetary, the Family walking behind the hearse, and a rousing Bourbon Street Parade immediately after the graveside ceremony. Joe Torreganno, Gregg Stafford and Mike White are handling the Excelsior Band. Sheik Richardson as the official Assunto Family photographer wears the Hurricane Brassband Hat (of course).

From 15 till 21 October 06 Sheik Richardson is the guest of our support systems in Eschweiler and Maastricht.

The Cultural Ministers in the Major's office, Stresa Italy

First days of October 2006: A delegation from Jazz Ascona is staying with the Arabi Wrecking Krewe AWK in New Orleans, getting information about what support has already been installed, planning the start of the AWK work camp that may be supported by the City of Ascona, Switzerland and further on by some Italian cities around Lago Maggiore.

From August 8. to 28. 06 our member John Frederick Lumma, student of social work at the Catholic University of Aachen (KFH), is invited to New Orleans by Sheik Richardson. Fred works hard and he also has started to enjoy oysters.

29. August 06 Tremé Brassband Funeral March for the Hurricane Katrina victims - Sheik is joining the parade with his trumpet and camera. 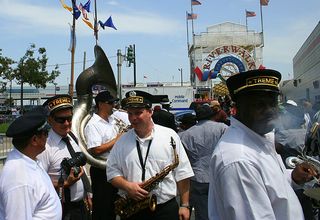